A motor with a standardized male fitting (connection) that accepts attachments with the matching female connection.

A slow speed handpiece without internal reduction gears or attachments, usually rotating at speeds near 20,000 rpm.

a nose cone, angle, or electric speed increasing handpiece that quick disconnects on and off the front of a motor to provide various bur holding options.

A mechanism enabling the operator to change a bur without the use of a wrench, by pressing a button or raising a lever.

A steam sterilizer which destroys all living organisms through the medium of heat and pressure. Temperatures are raised to 270-275 F while the pressure is raised to 30 psi.

A rotary dental instrument, which when placed in a handpiece is used to cut or carve tooth structure. Burs come in a variety of shapes and sizes and can be made of high speed steel, carbide, or diamond coated material.

A closed cylinder which houses a rotating turbine assembly inside the head of the handpiece. Designed for easy replacement.

A handpiece bearing that incorporates ceramic balls, usually silicone nitride, instead of steel. Ceramic balls are harder but lighter than steel, thereby providing a longer wear life with less stress on the bearing retainer. Ceramic bearings can be utilized in a lubricated or lube free mode.

A sterilizer which uses a chemical to generate chamber pressure instead of steam. The absence of water in the process reduces rust and oxidation of instruments.

Air supplied through the handpiece from the dental unit tubing to the cutting surface to cool the tooth or disperse the water spray, while flushing away residual material resulting from the removal of tooth structure.

The part in the handpiece turbine used to hold the bur.

Another word for the chuck mechanism.

Attaches the handpiece to the dental delivery unit that supplies air and water to the handpiece. There are four types of standard U.S. connectors. They include the 2, or 3-Line (also called a Borden) and 4-Line. The 4-Line (also known as a Midwest) is the most popular connector. In a 4-Line connector, the holes are (1) drive air, (2) chip air, (3) water, and (4) exhaust. Sometimes a fifth line or hole is added for a fiber optic bundle. A newer type of connector, 6 Pin, is now available which provides an electrical connection for a fiber optic light bulb. Hole size and location are indicated by a standardized ISO specification.

The front section of a handpiece which changes the desired angle to provide better bur access and visibility to the operator during use.

Refers to the water spray directed at the bur to cool the tooth when cutting.

Any angle that operates on the front of a nose cone that has a protruding shaft designed to fit into the nose cone chuck.

The compressed air used to rotate the turbine in a dental handpiece.

The cap, or cover which is removed to install the turbine.

The air discharged from a dental handpiece after spinning the turbine.

A handpiece through which a transparent fiber or cellular optic bundle transmits light to illuminate the oral cavity.

A chuck which holds the bur strictly by friction generated from an internal spring assembly. The bur is simply pushed in and out of the chuck with a special tool using force to overcome friction.

A handheld device which engages rotary instruments for cutting, cleaning or polishing the teeth. A handpiece can be belt-driven, pneumatic (air or gas driven) or electric.

A handpiece which operates at a speed greater than 100,000 RPM.

A mechanism which utilizes a wrench to tighten the chuck. This design incorporates slots which create jaws that are compressed onto the bur shank when tightened with the corresponding wrench.

An attachment that holds a specialized bur which is mechanically retained by the use of a swinging hook that engages a recess in the bur shank.

A liquid applied to moving parts of a handpiece or attachment in order to reduce friction, heat, or wear, or applied to surfaces in close contact to prevent them adhering to one another. May also include a solvent for cleaning.

A straight attachment used with a slow speed motor which holds a lab type bur (3/32″ shank) or any standard doriot attachment.

An angle that holds a brush or cup containing prophy paste used by a hygienist for cleaning teeth.

A handpiece attachment or fitting designed to allow easy separation of the handpiece from the supply tubing.

Another name for a high speed turbine, usually self contained to allow easy replacement.

A type of low speed motor utilizing small vanes instead of a turbine to trap drive air in a rotor assembly to generate rotation.

Revolutions Per Minute. A unit of measurement indicating speed.

Same as a low or slow speed handpiece. Often refers to a handpiece with a nosecone permanently “fixed” to the motor.

Instead of threads at the rear of a handpiece, the swivel is usually a separate part that threads into the supply tubing and incorporates a quick disconnect. Designed to allow the handpiece to rotate where it attaches to the air supply tubing in order to reduce fatigue on the operators wrist.

Located in the head of a high speed handpiece, the turbine holds the bur or cutting instrument while rotating from high pressure compressed air. A turbine consists of five components: spindle; chuck; impeller; bearings; and two “0” rings. 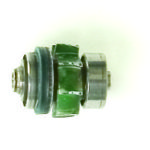 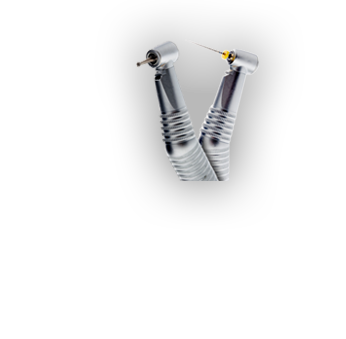